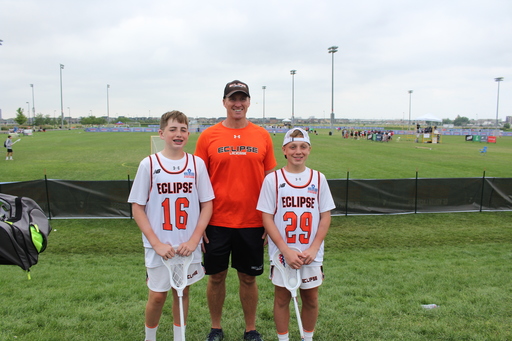 Assistant Coach for Eclipse U13 team, Roberts helped coach the team to their 9th place finish at the Series

Chris Roberts has served as the Head Coach of Boys' Varsity Lacrosse since 2003, leading the team to win the Western New England Division II Championships in 2012 and 2013. He loves working with high schoolers, stating, "It's just such a cool time in their lives, and it's made even better by being at boarding school where you have more interactions than just on the field. I have some of my players in the classroom and dorm, and some I even get to coach in other sports." Roberts is the Mathematics Chair at Canterbury, and also works with the Boys' JV Ice Hockey team.

In addition to his dedication to prep school lacrosse, he began coaching youth lacrosse in 1999 and currently serves as the Assistant Coach for Eclipse Lacrosse U13 National Team. This season, the team was invited to the World Series for Youth Lacrosse in Denver, CO. There, the team competed against four international teams from Iroquois, Israel, and Denver as well as 20 qualifying teams from various regions across the U.S.

Roberts says it has been an incredibly rewarding experience to share the sport with younger players, too. "Little kids are like sponges and can improve vastly in just one week. It's been amazing to work with these kids over the course of a whole year, and see how much they've accomplished." Even more rewarding has been having his own son on the Eclipse team. "It's an exciting bond to share with [my son]; I get to be his coach and his dad, and we do more as a family. Lacrosse is a sport that's given me a lot, and I'd like him to have some of the same experiences of being on a team and being part of this strong, unique community."

The World series took place at the beginning of July and was an unforgettable time for the Eclipse team. "It was a great experience for the players with opening ceremonies, a semi-formal banquet, and championship game with a procession of all the teams. It genuinely feels just like the Olympics for them."

Founded in 2013, Eclipse Lacrosse Club is based in Fairfield County and is the leading lacrosse development program in Connecticut. Eclipse players hail from all throughout the state, but the teams practice year-round out of New Canaan, CT, allowing teammates to become close on and off the field with peers whom they may not have otherwise met. Many of the players have competed together since their third grade and have grown together as athletes, team members, and individuals.

Prior to Canterbury, Roberts played lacrosse at Princeton University, NJ, where he helped lead the Tigers to their three NCAA DI championships in 1996, 1997, 1998. The 1997 National Championship team was crowned Champion of Champions in 2015.