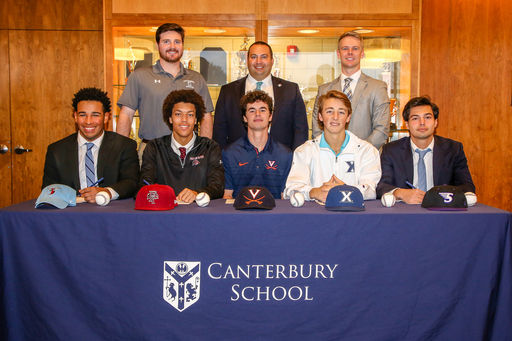 In the spirit of National Signing Day, several Canterbury Sixth Form athletes signed their letters of intent to Division I and II programs the week of November 11.

"I am really proud of our 2019 baseball players who are moving on to play at the next level," noted Head Coach Todd Mathewson. "All of the players have already made a huge impact on our program at Canterbury, and I expect them to have an even greater Sixth Form year this spring. They each have a very bright future, and I look forward to continuing to support them as they move on to the next step in their baseball careers."

"Our entire coaching staff is so thrilled for these four amazing young women," remarked Head Coach Lindsay Mulhern. "Their hardwork and dedication has paid off, and we are excited to watch them grow and flourish at the next level."

Canterbury wishes these students success on their continued athletic careers!