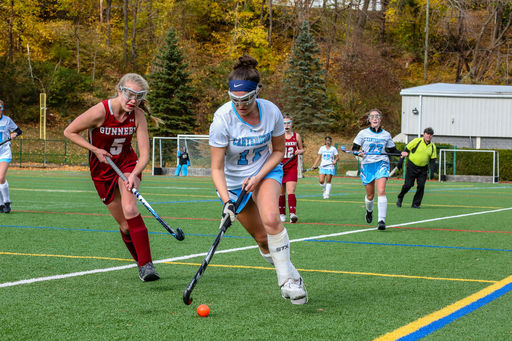 Canterbury swept the second annual Gunnery Day competition on Saturday, November 10, with wins by Varsity and JV Field Hockey and Boys' and Girls' Varsity soccer. The day, which marks the close of the regular season for all fall teams, also marks the height of the longstanding Canterbury-Gunnery rivalry. With the points added from the Gunnery Day events, Canterbury now leads 7 to 1 toward the Canterbury-Gunnery Cup, an award to be presented at the end of the year. This tradition began at the beginning of the 2017-18 academic year to observe the athletic rivalry between the two schools and their close ties within the Litchfield County community.

"The Canterbury Saints kicked off their 2nd annual Canterbury-Gunnery Cup in fine fashion by taking 7 of the 8 athletic contests played this fall," noted Athletic Director Jim Stone. "And on Gunnery Day, the Saints excitingly swept four games played. We are looking forward to more spirited competition between the two great schools as we head into the winter season."

For the week leading up to the day's events, the entire Canterbury community participated in spirited dress. Monday showcased the worst in Canterbury dress-code with the Best Worst Dress Code theme. Stripes with polka dots and multi-colored plaids ruled the School in horrific fashion. Tuesday was Twin Tuesday and Wednesday showcased the red, orange, green, and blue as each Form dressed in their special color. Thursday, appropriately themed #TBT, had the entire student body dressing in flared denim. The Beatles even made a special guest appearance on campus that day, guitar-case clad and all.

The week's events culminated with a pep rally and all-School bonfire on Friday evening. Emceed by the Sixth Form Council, the pep rally featured varsity teams performing skits and dances. Following, students and faculty celebrated with a bonfire. The fall varsity team captains and Sixth Form Council led their classmates through a parade of Underform students to the bonfire on the football practice field. Although the evening was cold and windy, Canterbury students still enjoyed the bonfire and warmed up with hot chocolate and donuts.

"Gunnery Day was a great way to end the fall athletics season, and the pep rally showcased Canterbury school spirit at its best," noted Dean of Students Jake Dellorco, who worked with the Sixth Form Council to organize the week's events. "We are excited to see how this tradition continues to grow in future years."
Gunnery Day Games
Pep Rally PhotosSpirit Week Photos