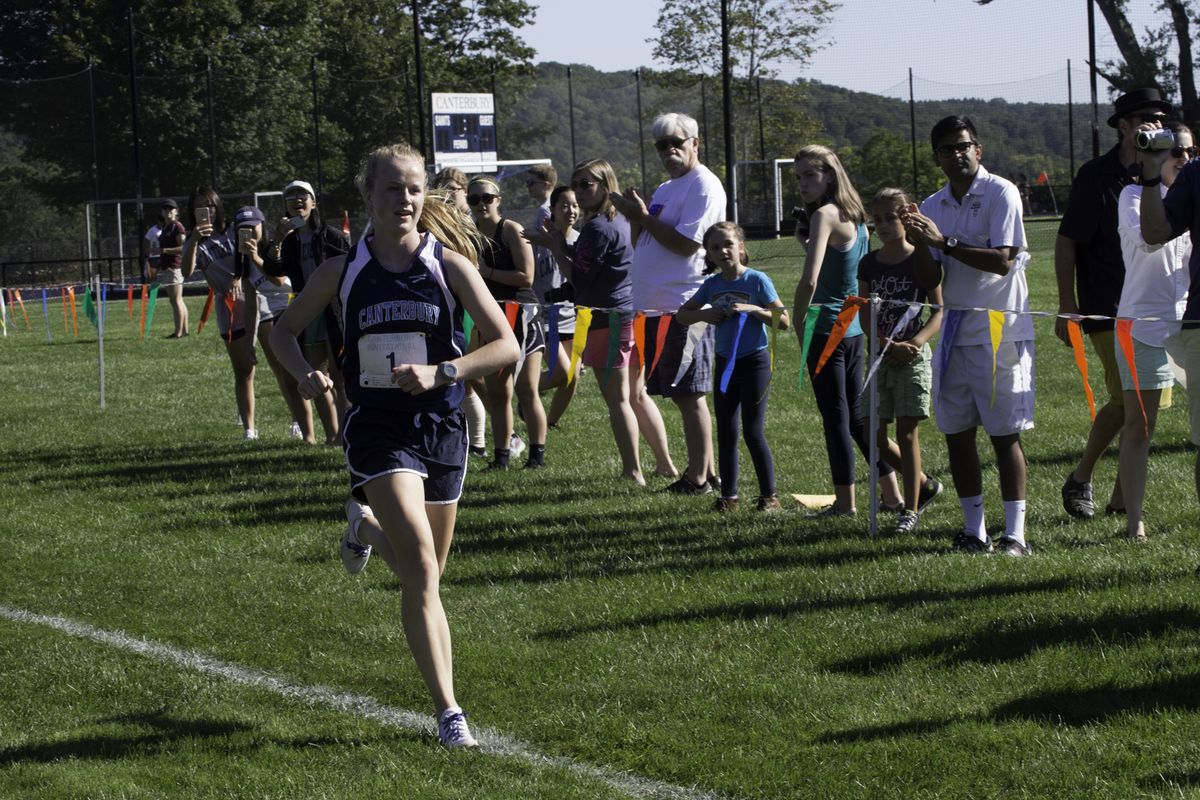 Anna Oeser '18 won the 45th Annual Canterbury XC Invitational on Saturday, September 23rd, securing her place as the only runner to have won the Invitational title four years in a row. Oeser, who began cross country her first year at Canterbury as a way to train for her winter sport (basketball), has been undefeated since November 2014. She has consistently improved her Invitational time since first running the meet in September 2014.

"When Anna rounds the corner in the last leg of the race, she's always alone," says Marc Vanasse, Canterbury's longest continuous faculty member and current School Photographer. "Having watched the race each of the last four years to snap the first place finisher, I have to wait for what seems like at least five more minutes for any other runners to come up behind her." Oeser is an athletic force for the Canterbury Saints. She boasts six course records across New England at nearly every course she's raced (Berkshire, Cheshire, Gunnery, Suffield, Williston, and Kimball Union Academy). She has been the NEPSTA DIII Champion for the 2015 and 2016 seasons and holds the meet records for the Suffield Gordy Glover, Westminster Miller Invitational, and the Cheshire O'Connell Invitational. She also holds Canterbury's school record on her home course at an impressive 18:56. Apart from cross country, Oeser is a three sport varsity athlete as a member of the Varsity Basketball and Varsity Track and Field teams. She was captain of both for the 2016-17 year as a V Former, a promising indication of her leadership for the teams' upcoming seasons.

"As her coach, I have had the unique opportunity to just watch her - to see her talent develop," notes Canterbury Girls' XC Coach, Tracy Garcia-LaVigne. "It's been fun to be witness to her remarkable growth." While Oeser is a naturally talented athlete, she is also intrinsically motivated, always improving her athletic abilities. Her teammates decidedly say that she dedicates herself wholeheartedly to improving her time each season, inspiring them to be better runners (and teammates) themselves.

Oeser, a "diehard" (four year) day student, is preparing for the basketball season after XC finishes this November. In addition to her athletic accomplishments, Oeser is an active student leader on campus, serving as both a Sacristan and Day Student Proctor.