Annual Meeting of the Society of Alumni 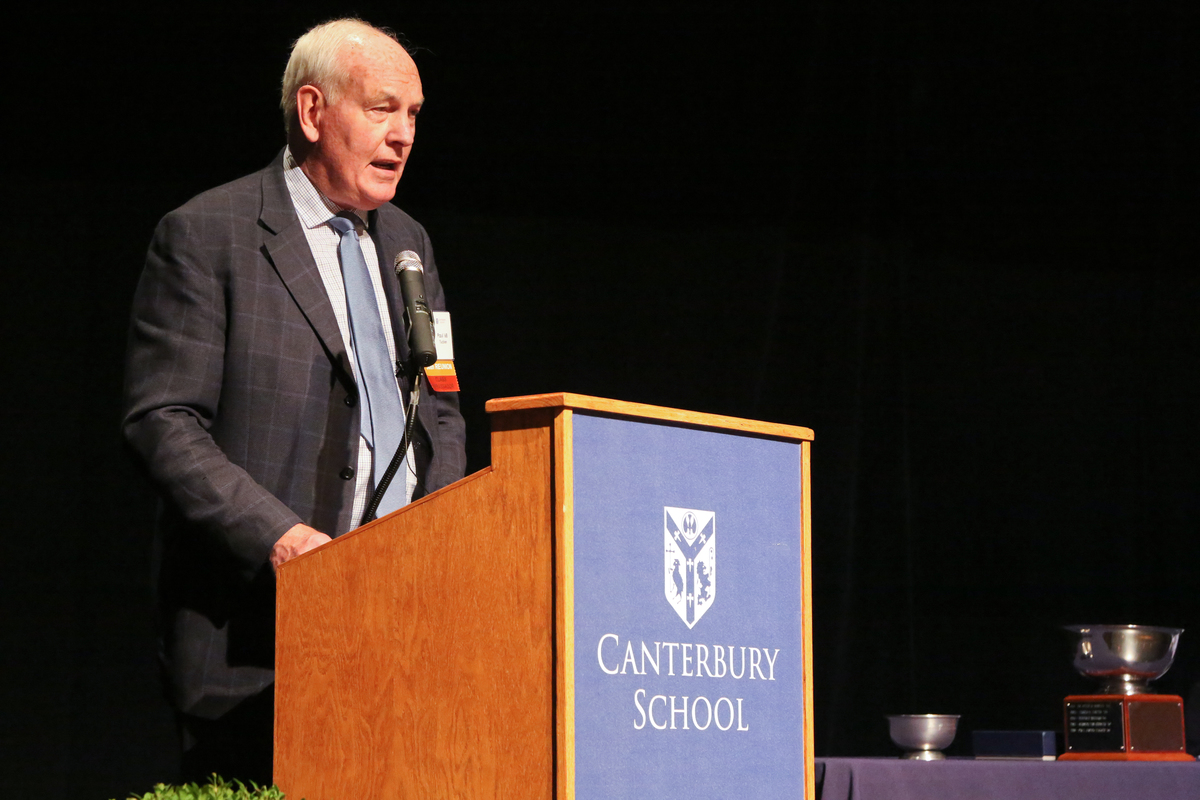 On Saturday morning following Alumni Weekend's Parade of Classes, alumni gathered in Maguire Auditorium for the Annual Meeting of the Society of Alumni (SOA). The SOA Executive Committee and Members at Large were in attendance at the event, which included alumni representatives from over a dozen distinct class years.

The meeting began with the induction of Elizabeth Dooley '10 and Joanna Martiska Woodworth '77 as newly elected members of the SOA Executive Committee. Following, Head of School Rachel Stone delivered the State of the School Address, and Marc Vanasse '73 was honored for his 41 years of dedicated service to the School.

The Thomas J. Sheehy III Distinguished Alumni Award, established in 2014 and named for the fifth Headmaster of the School, recognizes an alumnus of the School who, through their professional, community, or public service, has brought distinction to themselves, credit to Canterbury, and benefit to the communities they serve. Paul is currently Professor Emeritus at the University of Massachusetts Boston where he has taught for 36 years. He earned his PhD in the history of art from Yale University and his bachelor's degree from Williams College. Paul has previously served on the faculties of the Institute of Fine Arts, NY (NYU), the University of California Santa Barbara, CA (USCB), and his alma mater. He is considered the world's leading authority on Claude Monet.

Paul served as the President and Chairman of the Board of the Terra Foundation for the Arts and is the founder and Director of the Arts on the Point, UMass Boston's internationally acclaimed collection of public sculpture. He has been honored with numerous awards and grants, including three Chancellor's Awards from UMass Boston. Paul is the fifth Canterbury alumnus to receive this award, presented annually at the Society of Alumni meeting.

The Outstanding Young Alumni Award, established in 2018, honors an alumnus/a who graduated within the last 25 years, who has made significant contributions to civic organizations and/or a chosen profession, whose life is characterized by creativity, curiosity, and community service. The recipient reflects the highest ideals of Canterbury School. Lilly currently advises on strategic communications for the Department of Defense's health enterprise. She previously worked with the Department of Defense's US Southern Command, where she led on strategic planning and communications for global health collaboration with partner nation military and civilian institutions across South America and the Caribbean.

In 2009, Lilly completed a 27-month Peace Corps service in the West Indies as a community development volunteer and established an orchestra for underserved youth in her assigned village. Her experience in grassroots development was a driving force for her ensuing career in the US government. Lilly received her master of public administration and MS in social policy from the University of Pennsylvania and her bachelor's degree in government and psychology from Dartmouth College. The inaugural recipient of the Young Alumni Award, Lilly is esteemed within her chosen field as she is amongst her Canterbury classmates.

Paul accepted the Distinguished Alumni Award at the SOA meeting while Lilly sent in recorded remarks as she was home with her newborn daughter. Classmates of both recipients were in attendance to honor their fellow alumni's achievements.