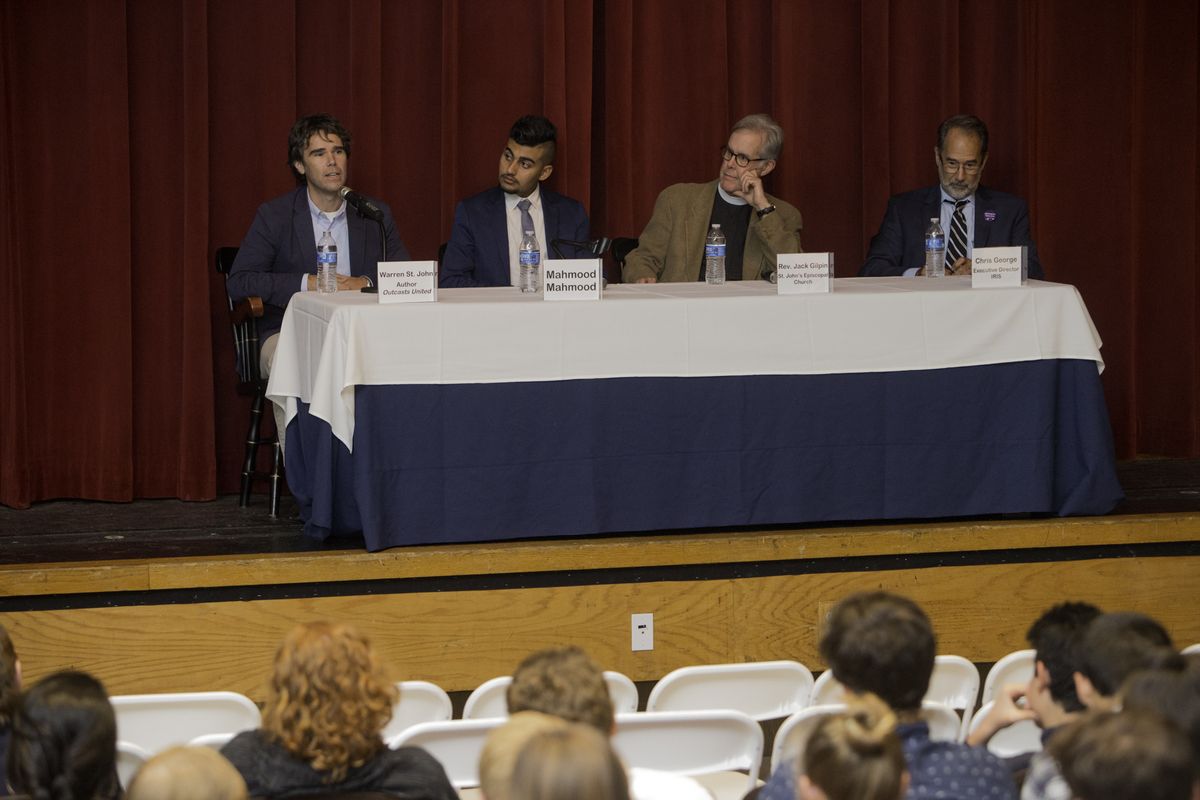 On Friday evening Canterbury School hosted a panel discussion focused on the current global refugee crisis, facilitated by the school's all-school summer read, Outcasts United: The Story of a Refugee Soccer Team that Changed a Town by Warren St. John. The book tells the story of a soccer team composed exclusively of teenage boy refugees (called the Fugees) and their experience living and playing soccer in the town of Clarkston, a suburb of Atlanta, following their resettlement from communities across the globe. Students and their advisors have been using this book to discuss current events during the initial sit down lunches of the academic year as it provides an informed look into the complexities of global resettlement. It was selected as the School's summer All-School Read and each faculty member and student was provided with a copy.

Using the book as a springboard for discussion, Canterbury School hosted a distinguished panel, including the author and New York Times reporter Warren St. John, Christopher George, the Executive Director of the Integrated Refugee and Immigrant Services in New Haven, and Jack Gilpin, the pastor of St. John's Episcopal Church in New Milford who has been helping to settle a refugee family in the New Milford community. Mahmood Mahmood, a teenage refugee from Iraq, was also a member of the panel. He, who is the same age as many of the VI Form Canterbury students, spoke of his experience as a refugee resettled near New Haven.

Each panelist offered their perspective - unique as they were - on the global refugee crisis. St. John spoke of his experience writing Outcasts United, soccer, and his personal relationship with the players on the Fugee team, while Gilpin told the story of how his parish and three others in New Milford became agents in resettling a family from the Congo. Gilpin worked with George's agency, IRIS, to do so, the process for which was detailed by George as he took students in the audience through the steps of the U.S. Government refugee vetting process. Mahmood's story was one of personal experience - his family was resettled in Connecticut after his father was threatened and shot due to his brother's work as a translator with the U.S. Military.

Though offering unique perspectives, each panelist was linked together in their reflection on the challenging process of resettlement. The family that Gilpin has worked with has children the same age as many Canterbury students, which he highlighted for the audience as a difficulty in it of itself. Soccer has been helpful for the family's teenage boys given that, similar to the Fugees' experience, soccer is a common language for them and their new classmates. While soccer was a common thread across the panelists' remarks, the nuances of the refugee resettlement process were eclipsed the game. Mahmood, who recently graduated high school with honors and is beginning his college career, remarked how incredibly difficult and unimaginable being a refugee and going through the U.S. vetting process, a sentiment echoed in the remarks and experiences of all the panelists.

Following introductions and backgrounds, students had the opportunity to engage in a discuss with the panelists. V Former NiKki asked St. John if he stayed in touch with Luma, the Fugees' fearless coach, while English Department faculty member Jay Bush asked George, the IRIS Director, how he felt the current political climate would affect his agency and others like his in their role in refugee resettlement. Each panelist offered an educated response and stayed after the panel to continue the conversation with many curious community members.

Canterbury thanks each of the panelists for their time and consideration in joining our School for the evening's event and discussion.