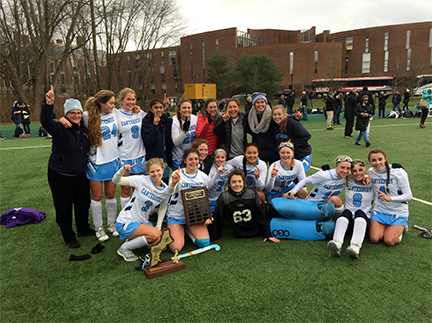 Their 12-5-1 record put them in contention for postseason play. In the quarterfinals, Sara Bouwman '17 scored in overtime to give the Saints the 2-1 win over Newton Country Day School the previous Wednesday. In the first half, she had scored off a pass from Anna Orlando '17.

In the semifinals, Bouwman had a hat trick in the first half, Emily Martino '17 had two assists, and Ariella Haas '18 added one assist against Ethel Walker (3-1) on November 19.

"Whenever I told the girls it was going to be a tough game, or they needed to work extra hard they always replied 'we've got this coach', said Cammy Roffe, head coach and science teacher. "We also talked frequently about 'controlling the controllables'. Every member of the team demonstrated tremendous sportsmanship. They were a great group of athletes who came together as a team. They played for each other, and encouraged, supported, and really loved each other."

On the day of the championship game, both Roffe and assistant coach Leigh Getz '11 believed the team who scored first would win. At the half the scoreboard read 0–0.

The Saints came out strong in the second half, exhibiting greater poise, smarter passing, and stronger teamwork. The defense was outstanding, as was goalie Jami Procanik '19. "Everyone really had their best game of the season," said Roffe. "We scored about fifteen minutes into the second half to go up 1-0. New Hampton charged the rest of the game and even earned a penalty corner as time ran out. Ellyn Fritz made an amazing stop and pushed the ball wide/out to end the game."

In addition, her dad, trustee Jim Briggs '56, taught and coached at Canterbury in the early 1960s and helped lead the baseball team to Connatonic League champs in 1964. He also coached hockey and football. After leaving Canterbury in 1965, he was the head varsity baseball coach at Williams College for many years. While there, he also coached women's ice hockey and freshman/j.v. football for a few years. Even sister Lee Briggs Couch coached, leading lacrosse teams at Wesleyan, Cornell, Rye Country Day School, and King School.

Cammy arrived at Canterbury in 1995 and first coached j.v. field hockey. Four years later, she took over from Cindy Taylor. She took a hiatus from coaching from 2002-04 to serve as assistant dean of students and weekend activities coordinator. In addition to coaching field hockey, she has also coached ice hockey. She helped Cindy Taylor and Charlie Huntington with the varsity team in her first few years and started the girls' j.v. program. Recently, after assisting Chris Roberts with the j.v. team for two years, Cammy took over the reins and will coach the team this season. From 1996-2013 she coordinated the School's Learn to Ride program.

Summarizing the team, Cammy said, "This was an extraordinary group of young women athletes, who played for each other, united in the goal of obtaining a championship."

Congratulations to the Varsity Field Hockey team and their coaches, managers, and fans!