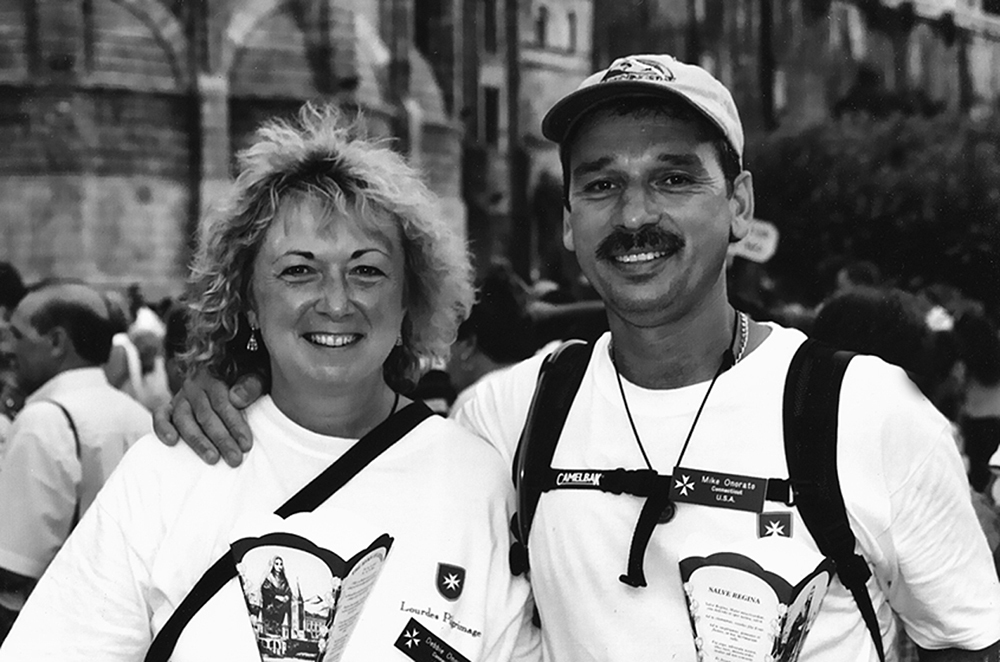 Debbie Onorato, director of retail sales, has been synonymous with Canterbury's athletic program since 1987. Through her management of the hockey rink concession stand and school store (located in the Athletic Center next to the O'Neill Arena), Debbie has been an integral member of the Canterbury community. Her thirty-year legacy has spanned generations of hockey players, dozens of youth athletic leagues, and thousands of Canterbury alumni. We celebrate her November 4 retirement with fond memories, best wishes, and many thanks.

"I have loved everything about working at Canterbury," noted Debbie upon reflection of her career at the School. "But with thirty years here, it just feels time." Debbie began working at Canterbury in 1987 at the prompt of Marc Vanasse '73, school photographer and longest tenured faculty member. Marc had been asked to run the school store, but, as he put it, "I needed out of retail." Debbie was familiar with Canterbury because of friends affiliated with the School, so with Marc's suggestion, she stepped in to manage. While her job was primarily to supervise the buying and selling of course books, her role at Canterbury quickly extended beyond those confines. She grew to manage all retail aspects of the School - hockey gear for players, clothing for Canterbury fans, and snacks for those attending athletic events. Self-described as the manager of an on-campus CVS, Debbie grew the school store from a tiny closet in which students purchased course materials to a place in which students were able to purchase items they did not otherwise have access to as boarders. Students felt - and continue to feel - that Debbie took it upon herself to fill a necessary and widely appreciated role on campus.

With the expansion of her retail role, Debbie also became the unofficial community liaison between Canterbury and the greater New Milford community given the location of the store in the Athletic Center. She is the first - and sometimes the only - person that many visitors interact with on campus. Families whose club teams practice in the rink often only think her face and friendly demeanor when recalling the School. "Canterbury is always at the forefront of her mind. Everything she does reflects what is best for the School," notes Jane Curley, assistant to the head of school and close friend of Debbie's. Debbie is often in the store and concession stand as early as 5 am just to be ready for youth hockey programs that use the O'Neill Arena. "I can't even begin to count the number of nights Debbie has slept over in the store," recalled Misi Babington, associate director of athletics. During hockey season, nobody ever saw Debbie outside of the Athletic Center as she was busy preparing sausage and peppers, spaghetti and meatballs, and turkey chili for the "Z Team" (zamboni crew).

Debbie and her husband Mike, who died in 2007 from a hang gliding accident, both epitomize the Canterbury spirit. Colleagues recall countless memories of the couple - always together - doing the most that they could to help their friends. "Everything they did was without being asked and always with genuine smiles," noted Viv Simonelli, Debbie's close friend and longtime colleague. Leila Stepankiw, athletics equipment manager, recalled Debbie and Mike arriving at her house with pizza and wine when she moved, ready to help her load and unload boxes all night without a request to do so.

Unanimously, all current faculty members whose years of service have overlapped with Debbie and Mike have all recounted several stories of the "laying of the ice" in the rink - a job that Mike would take the lead on and that Debbie would "cater". The process was a laborious effort which would often span from dusk to dawn for several days at a time. Mike and his crew would painstakingly hand paint the arena which was followed by setting several sheets of ice - all to make sure Canterbury had some of the best ice in New England. Debbie appreciated how hard those around her worked, and she'd match that dedication tenfold by preparing batches of sausage and peppers, spaghetti and meatballs, and turkey chili for the crew.

Debbie has always been one with great strength, but her courage shone particularly true when faced with the death of Mike in 2007. While Mike was honored and his loss mourned by the entire Canterbury community, Debbie continued her work at the School. Constantly surrounded by those who loved Mike and recalled his memory, her commitment to the School - and what was best for the community - has been evidenced even more so over the last decade.

Upon hearing of Debbie's upcoming retirement, many alumni have extended words of appreciation and reflection. Thinking back on their hockey years, the primary image that comes to mind for many of them is not of a winning goal, but instead of Debbie on the sideline with her portable stovetop and crockpot, dishing out hot chocolate or soup - anything to keep students and spectators warm and nourished.

One of those hockey players who considered Debbie family (and vice versa) was Mike Dunham '90. "Of all the great memories from my days at Canterbury, the the most lasting one is of you letting a homesick 15-year-old hang out in the bookstore in the basement of Old Schoolhouse, just chatting," Mike '90 remarked. "You treated me as one of your own and nothing has changed as I have brought my own children around. Canterbury is a special place because of you and Mike, and I think everyone will agree with that. You are a part of Canterbury's soul and your smiling face will be missed on campus everyday."

In addition to hockey players for which the Onoratos became unofficial parents, the couple often housed students during the Thanksgiving Break who were unable to return home. They facilitated ski trips during the Winter Weekend with eager students and took the pilgrimage to Lourdes in 2003 with other community members. Any student that has attended Canterbury during the last thirty years has had their experience at the School enhanced in some way - visible or not - because of Debbie. Rachel Stone, Head of School, remarked, "From the moment the Stone family first arrived on campus, Debbie was so clearly a central, warm, and welcoming presence. She is the living definition of 'Canterbury spirit,' having spent her life and career committed to our students and our School."

While anecdotally Debbie's favorite holiday is Valentine's Day, her appreciation for this particular day is a testament to her character and true essence - one filled with endless love, nurture, and dedication to Canterbury and its students. Debbie's commitment to Canterbury - its students and those who make the School run everyday like her husband Mike - goes beyond any job description. "She does so much for the School - so much that people don't even realize she takes care of," noted several colleagues.

Rachel Stone continued, "We feel fortunate to have had the opportunity to know and work with Debbie, and there is no question that she will remain the integral and welcoming member of the Canterbury family long after her retirement." And while Debbie has plans to spend time with friends and family away from campus, she already knows she will not be gone for long as she has several family members who are a part of the Saints community.

Debbie will be returning to campus for the Charles R. Huntington Annual Alumni Hockey game, scheduled for January 6, 2018. All alumni, families, and friends are invited to join us and wish Debbie well as she begins her next chapter. Please contact the Advancement Office at advancement@cbury.org or 800-526-1710 with any questions or best wishes to pass along on Debbie's retirement.