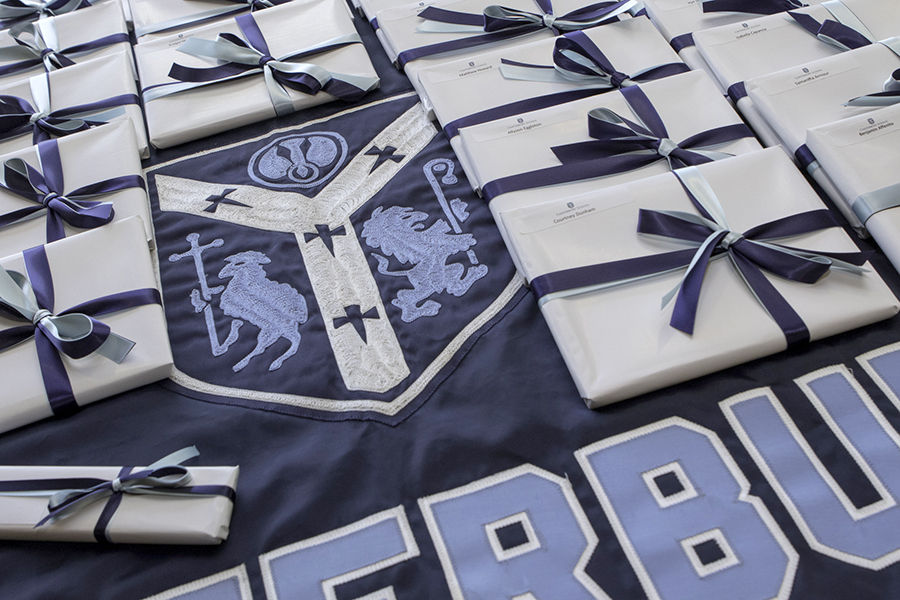 The Canterbury Honor Society was founded during the 1989-1990 academic year to advance scholarship and to foster the love of learning at Canterbury School.

At a dinner on the evening of May 15, the School recognized the hard work, dedication, and excellence of the thirty Fifth and Sixth Formers who comprise the 2016-2017 inductees.

The students' parents and advisors as well as some School administrators attended the dinner in Steele Hall Dining Room.

Bryan Kiefer, the Honor Society advisor, served as the evening's emcee and read a brief synopsis of each member's contributions to Canterbury. Rachel Stone, head of school, presented each student with a gift to commemorate their Society membership.

Canterbury English and Latin teacher JP Mandler, who retires next month after a 46-year career at the School, addressed guests.

He spoke about why a career in education proved to be fulfilling, some influences along the way, and his own discoveries about what he cared about and was good at.

"I learned that it isn't only the communication of ideas that fascinated me about teaching, but making connections with students, of seeing the response in their faces," said Mandler.

"As I come to the end of my full time career, I will take with me the memories of my own teachers and my teaching colleagues and most important, the many students I have taught who showed me that they were interested."

Fifth and Sixth Form honors students are eligible for membership in The Canterbury Honor Society. Fifth Formers with a Highest Honors cumulative GPA (4.0 and above) are eligible at the end of the first semester of the Fifth Form year. Sixth Formers with High Honors averages (3.7-3.9) who were not inducted in their Fifth Form year may be inducted in their Sixth Form year. Members must be enrolled in a rigorous academic program that includes honors and AP courses in a diverse course of study. Students should challenge the most demanding courses in at least three disciplines. They must have established a record of good citizenship in the school community.