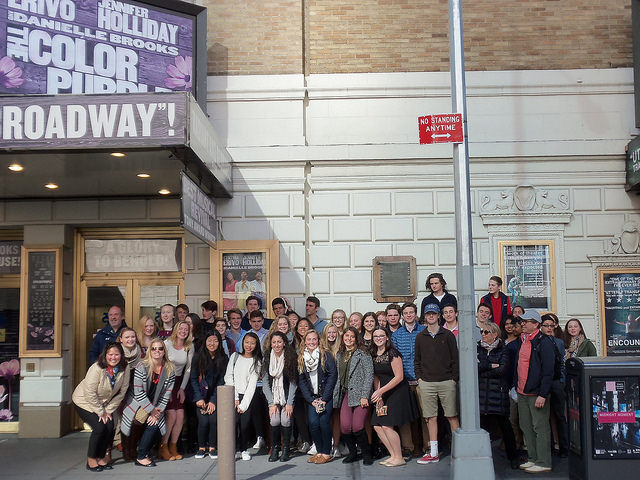 Canterbury students have the unique opportunity to attend a Broadway show twice a year, once in the fall and once in the spring. This year a record number of students – more than forty – signed up to see The Color Purple, based on the book of the same name by Alice Walker, who won the 1983 Pulitzer Prize for Fiction for her famous novel. The book was also made into a movie directed by Steven Spielberg and starring Whoopi Goldberg. The trip took place on Sunday, November 6.

"New York" magazine called the show "one of the greatest revivals ever."

"I usually reserve twenty tickets and then announce the trip at a school meeting," says trip organizer Wright Danenbarger, Dean of Faculty. "Thirty-five students signed up and so I had to order fifteen more tickets. Then, I received an additional fifteen requests and had to order more tickets and a coach bus rather than use a couple of the School's mini-buses."

The bus arrived in Times Square at 1 p.m., and the students and eight adult chaperones had free time to shop and eat lunch before the show at 3:00 p.m. at the Bernard B. Jacobs Theatre.

"I last saw The Color Purple when the movie came out in 1985, and I had forgotten how powerful the story was." says faculty member Kathy Bolster. "After all of Celie's suffering, she learned to accept the good she had in herself and around her. The Broadway set was very simple, so there was nothing to detract from the actors, whose commanding voices expressed joy, sorrow, fear, love, and trust. The experience was heightened by being able to share it with so many students who were hearing this story for the first time."

The Broadway trip was one of several fun weekend activities.

The Color Purple is about the empowerment of women, especially black women during the 1930s," says Skylar Stepankiw '18. "The story truly portrays the struggles women had to face and how those who stood up for themselves would be pushed back down. The show exceeded my expectations, and I'm so happy that I took advantage of the opportunity to see this Broadway show."