Greg Coleman '72 Returns to Campus to Address to Canterbury Community 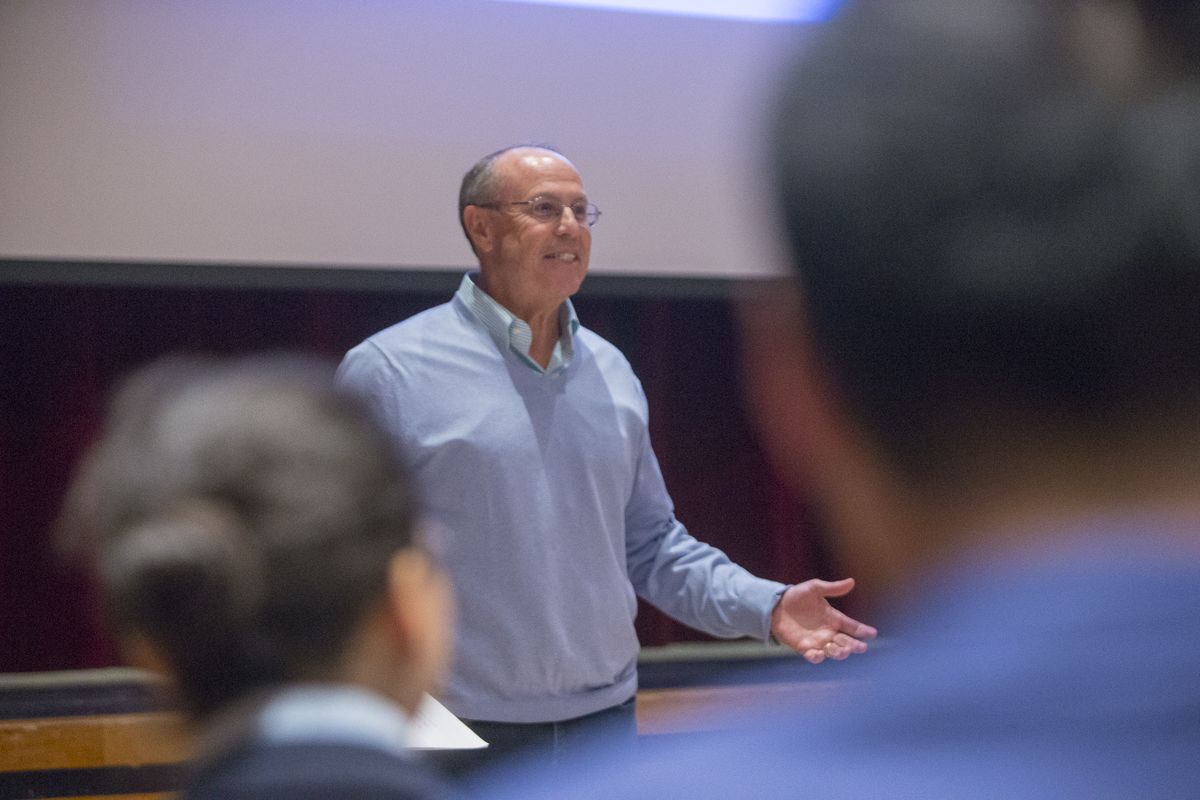 On Tuesday, April 24, Greg Coleman '72 returned to campus for his second annual School-wide address and Q&A session to engage in conversation with the Canterbury community surrounding digital media and his professional career and related advice. Speaking directly to the student body, Greg began by outlining his career path, emphasizing the effect Canterbury had on his professional growth. He paid particular homage to how current students can find their passion and take a nonlinear journey to success. "Being happy should be at the top of your list," he remarked at the beginning of his speech. "And there shouldn't be any ground rules for how you get there."

Greg relayed several personal stories by walking the audience through a timeline of How to Become President of Buzzfeed, a digital media conglomerate that boasts the third largest millennial audience on the internet. His How to timeline demonstrated Greg's professional success through a variety of ins and out, not all of which were instant achievements. "If I can leave you with one thing to do...figure out your passion in life. Take a few stabs, try new things and don't be afraid to say this sucks, I want to do something different and then move on."

Ben Coleman, Class of 2005 and Greg's son, also made a projector-screen appearance during the address through a Buzzfeed-produced video. The video, one of many widely viewed programs on Buzzfeed's site, shows Ben made up as an 80-year-old man and addressing his dad in the lobby of Buzzfeed's LA offices. While comical, the video highlighted Ben's passion for and accomplishment in his current job in videography. Greg compared his son's course through Canterbury and beyond as he ultimately found his passion in cinema. Greg's narration allowed students to reflect on Ben's journey—one which ended with him currently doing something he loves though via a nontraditional route.

Greg also discussed the importance of finding a good mentor. "I found someone who taught me it was okay to be myself," he noted. "It was pivotal in my career." While easy to conform to traditional ideas of success in the business world, Greg, with guidance from his mentor, was able to shape a unique trajectory for himself—something Ben did, as well.

Following the address, the community was invited to ask Greg questions, ranging from his personal life to career advice. Students brought up Buzzfeed's content ("What is your favorite Buzzfeed quiz?") and the daily life of a business professional ("How do you balance your work with staying true to your family and your personal time?"). Students continued to engage in one-on-one discussions with Greg well after the presentation.

After a full two hours of discussion and back-and-forth with the audience, Greg left the student body with well-guided advice: "Don't expect all glory - perhaps even a few belly flops - along the way."