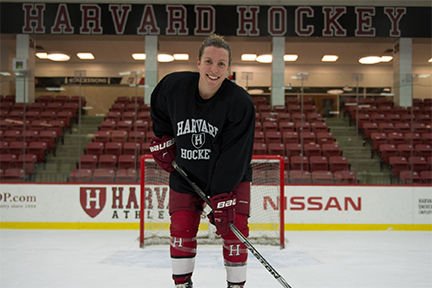 Michelle (Shelly) Picard, who won a silver medal at the Sochi Olympics in 2014, is turning her thoughts to empowering student-athletes at Canterbury when she joins the faculty next fall.

The Massachusetts native graduated from Noble and Greenough School in Dedham, MA, and graduated from Harvard College in 2016. While at Nobles, her team won the New England Division 1 title in 2008 and 2009. Shelly currently works with AmeriCorps as a tutor at Greater Oaks Charter School in Newark, NJ. When Shelly is not in the classroom with her students, she plays for the New York Riveters as a part of the National Women's Hockey League (NWHL).

"From the moment I arrived at Canterbury, I could tell it was a special place, and I am thrilled to be joining the community," said Shelly. "I loved my experience at prep school and I'm looking forward to being on the other side of it, engaging with students in the classroom, during athletics, and in the dormitories. I'm truly excited to work with passionate and motivated students while also learning from extremely knowledgeable and talented faculty members."

Michelle received her bachelor's degree in Anthropology and played a key role on the Harvard women's ice hockey team, playing all four years and captaining the team her junior and senior years. "Shelly is an extremely accomplished young woman, whose greatest strengths are steadfast character and integrity," said Katey Stone, head coach of the Harvard team. "Her uncanny ability to relate to others on all levels sets her apart from her peers and will serve her well as she joins the Saints community. Shelly was the best of Harvard. I look forward to watching her begin what I trust will be an equally successful career."

"We are absolutely thrilled that Shelly has chosen to join Canterbury," said Canterbury athletic director Jim Stone. "Her many achievements and experience at the highest level will be an enormous inspiration for our young women, both on and off the ice. Her energy and enthusiasm will propel the growth and success of our already outstanding hockey program. Our student-athletes are eager to learn from the best."

Please join us in welcoming Michelle to our community.