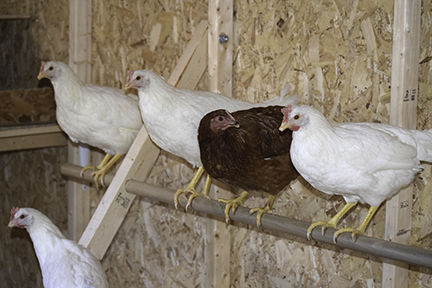 How and why do two Canterbury faculty members start a chicken keepers club for students? If you ask one of the club's advisors, dean of faculty Wright Danenbarger, he'll tell you that the idea was hatched one day during a conversation he was having with his colleague Chris Roberts, a math instructor. "Chris and I had been talking about chicken keeping, and he was interested in the hens I keep at home," said Wright. "He had a great deal of enthusiasm for the idea and I did not want to do it alone, so we teamed up to bring it to Canterbury. Best of all, it's is a student-run, self-sustaining project."

The Canterbury Chicken Keepers Club started this fall with twenty-three enthusiastic students and twenty-five eager-to-lay-eggs chickens. The club meets every two weeks to discuss how best to organize day-to-day operations and to share what they have learned from reading the club's "bible," The Chicken Whisperer's Guide to Keeping Chickens, forty copies of which were donated by the publisher.

To raise "seed money," they spoke to the Office of Advancement about offering a dozen fresh Cbury eggs a week during the school year to the highest bidder at the annual Parents' Weekend auction. Advancement thought it was a great idea, and the money raised by the auction item helped launch the project.

Math teacher Sam Hargrove, associate head of school Pete Cotier '86, and Chris built the coop. Ross Coco of the maintenance department and his crew helped, specifically with the roof. The coop was designed to be easily maintained, with a fold-up roost and easy-to-clean nesting boxes. It also sports solar panels to provide light and enough heat to keep the water from freezing.

Once the coop was complete, Chris then purchased chickens from Benedict's Home and Garden in Oxford, CT. They began with fourteen Leghorns (white) and thirteen Red Cross. These types are built for New England winters and are efficient egg layers.

The students are responsible for cleaning the coop, feeding and watering the chickens, and collecting the eggs. They do this daily in pairs on a rotating schedule. Students also make business decisions and promote the sale of eggs through social media, public relations efforts, and targeted messaging. The club had its first sale on January 6, and sold out (ten dozen eggs) in thirty minutes. The egg stand is open on Fridays in front of the dining hall. They are sold on a first come, first served basis.

Says Wright, "One of our major goals is to teach the students about sustainability. We hope the funds from egg sales will pay for the price of coop upkeep, chicken food, and hay/pine shavings."

Adds Chris, "We want students to not only learn about the responsibility of caring for the chickens, but also to learn the business and marketing aspects of a operating a small business. Students in the "Animation and Imaging" class designed logos, and the club voted for their favorite to be used on the egg cartons."

"I've always wanted chickens at home but we can't have them at my house so I was extremely excited to hear that chickens would be coming to my other home, Canterbury," said club member Kara Santoro '17. "My role in the club is to take care of the chickens one morning a week with my classmate Sinead O'Donnell. Of course, I also perform regular day-to-day coop maintenance and collect eggs.

Current parents Vlad and Carol Papov (Vlad '16, Bella '18) won the auction item and have recently started receiving their weekly egg delivery. After picking up his family's first dozen eggs, Vlad Papov wrote to Wright, saying, "I believe we have determined a perfect system! Picked up the eggs this morning from the admissions fridge on the way home from the gym. Made fried eggs when I got home today. Delicious!"

In addition to pumping profits from egg sales back into the project to pay for food and coop supplies, the club collects rainwater and uses food waste from the dining hall to help feed the chickens. The club's plans for the future include using chicken waste to fertilize a vegetable garden.