Owl Be Seeing You 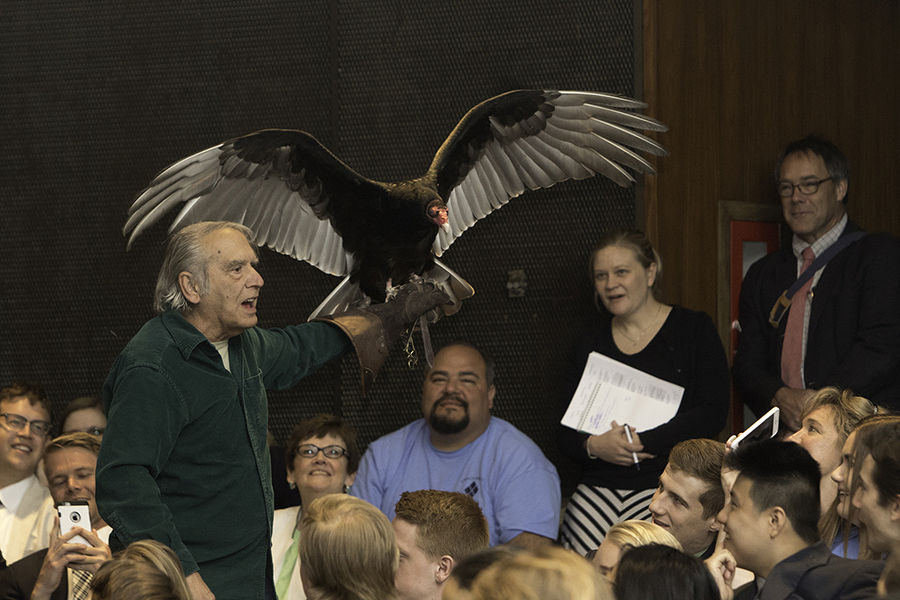 To celebrate Earth Day, Bill Robinson presented "Birds of Prey" in Maguire Auditorium at morning meeting on Monday, April 24. Bill has lectured on "Birds of Prey" for more than thirty years and is a regular visitor to Canterbury.

Using live wildlife, Bill discussed the animals' adaptations for survival and the importance of all wildlife in the balance of nature.

Bill first introduced the student body to a red-tailed hawk, a familiar sight over the fields of New Milford. Bill described how hawks hunt and how their talons are well suited for hunting and self-defense.

Bill also showed students an owl, a turkey vulture, and a Harris hawk.

He explained Harris hawks are native to Texas and the southwest and are primarily hunters of rabbits. Bill's hawk was tethered in jesses, thin leather straps used in falconry to make it easier to hold the birds.

To excited whoops from the students, Bill let the hawk loose then walked to the back of the auditorium. When he raised his gloved hand, holding a dead mouse, the hawk swooped over students' heads and landed on the glove.

After Bill's general presentation, he remained to talk to biology, Animal Anatomy, and Environmental Science students.

To view photos of Birds of Prey, click here.