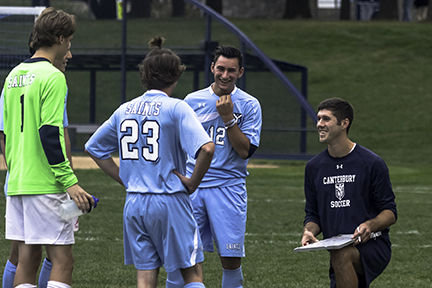 "Shawn was selected because he has made a significant contribution to the soccer coaching community," said Scotty McCarty, president of the association. "In addition, he has improved Canterbury's soccer program so much in the past couple of years. He brings a lot to the table, on the field and off. It is clear from the opposing coaches' point of view that he works hard to get quality soccer players to go to Canterbury. Shawn behaves in an exemplary manner on the field. He doesn't talk back to the referees, and he is congenial with opposing coaches and players. The Executive Board of the CSCA feels that Shawn is a great coach and that he will continue to make Canterbury's soccer program better. "

"I am honored to receive this award," says coach Ganow." "However, the majority of the recognition goes to the players and my assistant coach, Julio Omaña, who works behind the scenes to allow me to focus on preparing the players for practices and games. It has been a privilege to work and grow with the Canterbury soccer team over the years."

"I think Shawn was selected by his peer coaches for this award because they saw, from the opposing bench, the improvements he has made to the team and program over the past four years, " said Julio Omaña, During Shawn's first season, the team won three games. In 2015 and 2016 the team lost three games. It has been quite a turn around; however, Shawn is not satisfied. He wants the team and the program to continue to improve under his watch."

According to Omaña, Shawn has imprinted his style of coaching on his teams. He expects hard work and dedication from them, and they give it to him by working hard for him. When they do not, Shawn knows how to draw it out of them.

Off the field, Shawn has worked tirelessly to recruit players to come to Canterbury. The School is an attractive place for talented soccer players to play because of the changes Shawn has made to the program. Aside from teaching his teams the finer points of the game, Shawn instills in the boys a sense of discipline, self-reliance, and hard work. Shawn works with the boys in the off-season, helping them navigate the college recruiting process.

Accolades also come from one of Ganow's players. "Coach Ganow is easily the best man for this award. He is the most dedicated coach I have had in my athletic career. It is easy for coaches to come to practice and do the same drills everyday. Coach Ganow never wants practice to feel repetitive. We come to practice knowing what we need to work on, and he develops drills to focus our training."

Says director of athletics Jim Stone: "We are very proud of coach Ganow's efforts with the boys' soccer team this fall. He led them to a 14-3 record this season and a berth in the New England Class B tournament. His daily preparation and attention to the smallest details allowed his players to perform at a high level, and they were ready for each challenge. He created a team atmosphere where everyone is important and plays a valuable role for the team. We are very excited for Shawn and this well- deserved recognition, and we look forward to more success from his program in the years to come."